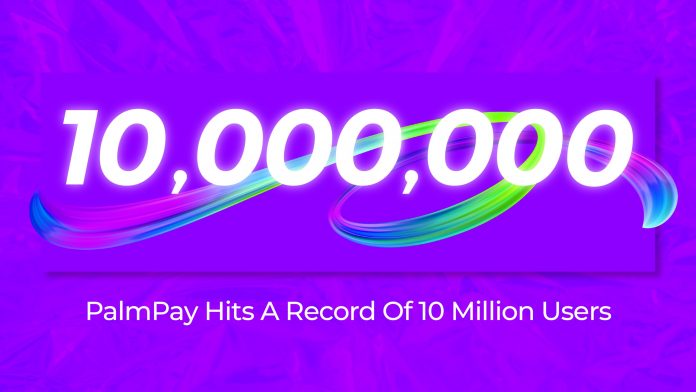 PalmPay, a fintech innovator aiming to make digital payment more accessible and flexible, announced that it has reached 10 million users in Nigeria. This represents a doubling in its user base within just six months and puts its customer numbers in the same league as major institutions only 3 years after the company launched in the market.

The fintech, which operates under a Mobile Money Operator license from the Central Bank of Nigeria, has gained significant traction with its payment’s app and nationwide agency banking network. Its proposition of instant financial account creation, fee-free bank transfers and cashback rewards on airtime and bill payments has appealed to Millennial and Gen-Z consumers, who are looking for more affordable banking options and prefer the convenience of a digital-first service.

Nowadays PalmPay is processing millions of transactions a day. And around 20% of the company’s customer base report that the PalmPay app was their first financial account, demonstrating that the Mobile Money Operator is contributing to driving progress towards financial inclusion targets in Nigeria, where 36% of the population remains unbanked.

Nigerians without smartphones can visit one of PalmPay’s 200,000 mobile money agents across the country, who can transact on their behalf or issue an innovative QR card that can be used to hold a balance. Consumers can also use PalmPay agents to deposit cash to their PalmPay accounts and to withdraw money using their debit cards through PalmPay-branded POS machines.

“We are delighted to be able to celebrate this growth milestone and are proud of PalmPay’s track record of making cutting-edge financial services accessible to every Nigerian – including the unbanked.”, said Mr Chika Nwosu, Managing Director, PalmPay Nigeria, “The pandemic has accelerated the shift from cash to digital payments and we are looking forward to continuing to work together with regulators and our partners to innovate to meet the financial needs of consumers.”

“Our significant growth in Nigeria demonstrates PalmPay’s ability to innovate to meet the financial needs of consumers, and we are looking forward to replicating this success as we scale in more markets across Africa.” said Sofia Zab, PalmPay Global CMO.

The launch of “PalmPay Anniversary Gold Rush”, a 35-day campaign is offering all the users who participate in the in-app Gold Rush game the opportunity to share a massive N300 million cash giveaway.

PalmPay celebration also marks PalmPay reaching the milestone of 10 million users in Nigeria as of July 2022. The anniversary campaign will run from Monday, September 5th, to Monday, October 10th, and will give substantial cash rewards and coupons in the app as a way of saying thanks to PalmPay’s users.

The fintech app is an intuitive digital wallet offering users money transfers and bill payments. Leading up to the PalmPay anniversary 2022, users are invited to join the “PalmPay Gold Rush” and unlock millions of coupons, earn free data, and share N300 million cash rewards. Users can save money and get huge offers by using a large number of coupons when making money transfers, topping up airtime, and paying for electricity, TVs, and other services available on the PalmPay App.

In addition, there are more chances to join the Gold Rush game and win larger cash rewards by completing daily tasks, such as qualifying money transfers, bill payments or team battles. All participants in the team battles game can play solo or share and engage in 2v2 or 3v3 battles with friends to win extra rewards from 8:00 am to 8:00 pm during the Campaign Period.

Chika Nwosu, Managing Director of PalmPay Nigeria, said: “PalmPay set out on a journey to make digital payments fast, safe, and reliable for people in Africa. The achievement of reaching 10 million users is amazing, and there is no better way to celebrate this than the launch of the PalmPay Gold Rush Anniversary Campaign. This campaign is PalmPay’s opportunity to give back to our users with the opportunity to receive cash rewards and exclusive discounts while transferring money and paying what they want.”

The company Gold Rush Anniversary Campaign commences on September 5th 2022 at 00:00 GMT+1, and the closing date is October 10th 2022 23:59 GMT+1. Cash rewards will be automatically added to the user’s PalmPay account at 8:00 am every Monday (during the Campaign Period). The rewards winner will be notified via the in-app push of the Selection Date.

For more details on the PalmPay anniversary campaign, download the latest version of the app available on Android and iOS platforms, or visit here.

Since launching in 2019, PalmPay has quickly established itself as one of the continent’s leading and fastest-growing payment providers with 10 million users and a mobile money agent network of 200,000.

The company raised a US$100 million Series A round of funding in August 2021, with US$140 million raised in total. The company is now operating in Nigeria and Tanzania, and will be scaling its proposition in other African markets in 2022.