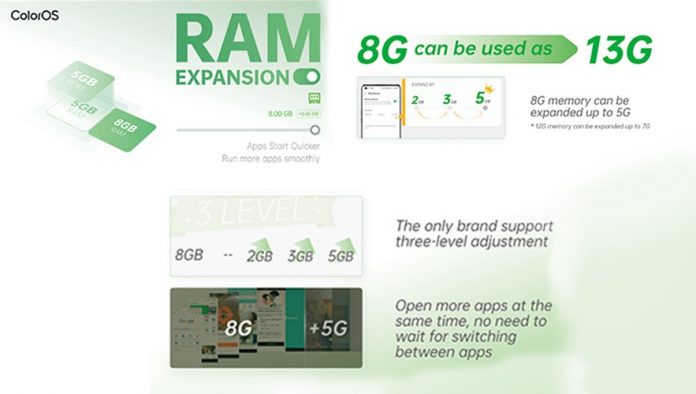 The company recently released its Memory Expansion Technology, RAM Expansion, for its Reno5 Series smartphones, allowing users to temporarily convert part of their smartphone’s available ROM to virtual RAM, simply in one click at the phone’s settings App.  Depending on the phone’s memory storage, users could also freely switch the level of RAM expansion according to their actual usage needs.

RAM is one of the fastest types of memory, allowing a device to quickly switch between tasks, meaning that the higher the amount of RAM a device has, the faster its response speed is. The amount of RAM a phone needs depends on what applications and features the consumer wants to use, including gaming, photography and video editing. Additional RAM gives the option of opening more applications in the background simultaneously, allowing the phone’s configuration to perform at its maximum capacity without freezing, hanging or overheating.

After carrying out a software update on the OPPO Reno5 Series (available from July), the RAM expansion function can be activated via the ‘About Phone’ section inside the settings App and carrying out a restart.

How to Expand RAM on OPPO Smartphones in 3- Easy Steps

● Update the smartphone software to the latest version.

● Select the expansion size as needed, and restart the phone.

● Open Multitasking interface, and you’ll find the expanded RAM has been applied as indicated in the ‘Close All’ button below.

● Otherwise, open “About Phone” to find the expanded RAM applied under the RAM section

Commenting on the announcement, Joseph Adeola, Public Relations Manager at OPPO Nigeria, said, “The option of RAM expansion gives our users a more reliable and flexible approach to customize their smartphone performance and adapt it to their lifestyle requirement and needs.”

Since launching in Nigeria in 2019, OPPO has demonstrated incredible growth to become one of the most popular smartphones in the country. With the firm belief in the manifesto ‘Technology for mankind, Kindness for the world’, OPPO is committed to providing technology experience that appeals to the tech-savvy, hyper-connected Saudi society and elevates their life in all facets.

Also read: OPPO Unveils the Process of Building a Virtual World with CybeReal

Prices and Specifications of TECNO Phones recently Launched in Nigeria (2021)