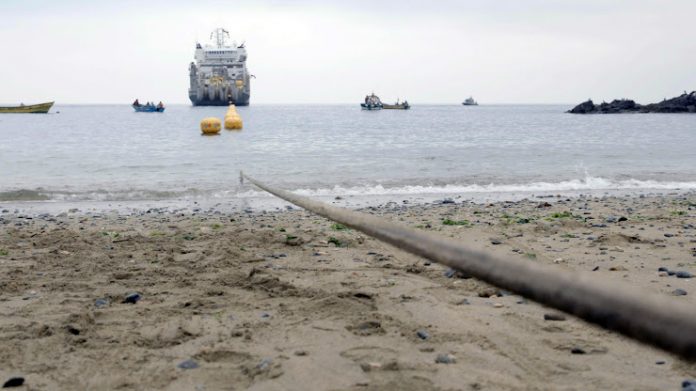 Last month, Google announced that the Equiano undersea cable successfully landed in Togo. This was the first in a series of landings on the continent for the subsea cable, which will run from Portugal along Africa’s west coast to South Africa.

While many subsea cables are named after historical luminaries, the Equiano cable has special resonance for Nigeria. It’s named after Olaudah Equiano, a Nigerian-born writer and abolitionist, so its landing in Lagos, Nigeria on Thursday is like a homecoming.

The second African landing of the Equiano subsea cable system will be located in the Lekki Peninsula area of Lagos, Nigeria.

People around the world use Google products every day to stay in touch with friends and family, find directions, connect with new customers or bring products to new markets. As 300 million people come online in Africa over the next five years, the Equiano cable is part of our ongoing commitment to Africa, expanding opportunity and improving connectivity in order to help bring the benefits of technology to more Africans.

Nigeria is sub-Saharan Africa’s largest economy. Still, the share of people using the internet stood at approximately 35% as of 2020 – double what it was in 2012. Across much of the country, people lack affordable, reliable & quality access, which limits their ability to benefit from, and contribute to, the digital economy. The arrival of Equiano is a key step in accelerating digital transformation not only in the country, but across the continent.

In the last five years, startups in Nigeria have produced five unicorns (startups valued at over a billion dollars). Businesses are also benefiting significantly from the usage of internet platforms, with total e-commerce annual expenditure predicted to climb to $75 billion by 2025, up from its current projection of US $12 billion.

Though a great deal of progress has been made, studies suggest that faster internet connections, better user experiences, and reduced internet costs will help accelerate these benefits.

The arrival of this cable comes as part of critical stages leading up to its deployment later this year, and it is expected to deliver up to 20 times more capacity than the region’s prior cables. We’ve worked with established partners and in-country experts to ensure that Equiano has the greatest potential effect in Nigeria and throughout Africa.

Equiano’s arrival in Nigeria is expected to result in faster internet speeds and significantly improve people’s experiences while online. Internet speeds in Nigeria are expected to grow almost sixfold by 2025, and retail internet prices are forecasted to decline by 21% over the same period. The same study found that by 2025, real GDP in Nigeria is forecast to be USD 10.1 billion higher than it otherwise would have been without Equiano and that the cable would indirectly generate roughly 1.6 million new jobs between 2022 and 2025.

2021 Black Friday Deals to Watch out for in Nigeria