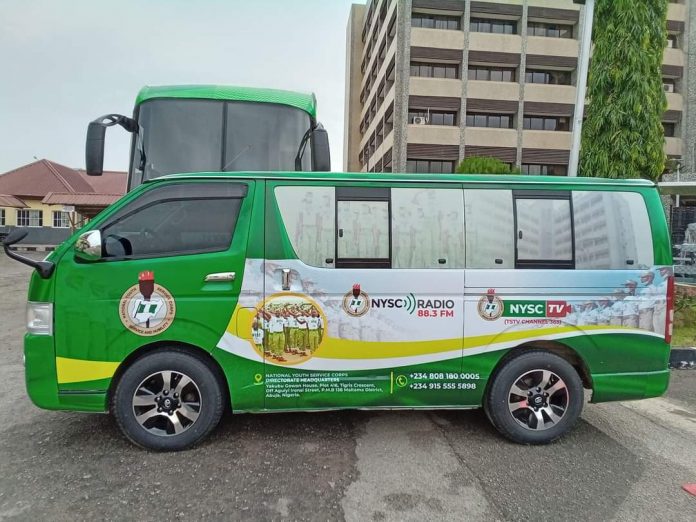 The National Youth Service Corps, NYSC, has launched its ultra-modern radio and television stations. The NYSC Radio broadcasts to Channel 88.3 FM in Abuja while the NYSC Television runs on TStv Channel 365.

The Director General of the Scheme, Major General Shuaibu Ibrahim announced this during the inauguration of the NYSC television and radio Stations at NYSC national directorate headquarters, Maitama, Abuja.

Ibrahim added that the station would be primarily run by corps members under the supervision of relevant NYSC staff members and the management has already engaged over 200 corps members as pioneer staff to manage the new radio and TV stations..

According to the NYSC Director General, the philosophy behind the establishment of the Radio and Television stations were to educate and entertain Nigerians, give the Scheme stronger voice to sensitize Nigerians on the policies of government, in addition to the promotion of national unity and value re- orientation.

He listed other achievements of the scheme to include: NYSC movies, museum, national cultural troupe and the establishment of the North Central Skill Acquisition Centre.

The founder of the scheme, Former Head of State, Retired Major General Yakubu Gowon was also present during the inauguration of National Youth Service Corps (NYSC) Television and Radio Stations on Thursday in Abuja. He urged the management of the NYSC to sustain the tempo of its on-going strides which has kept the scheme in national and global limelight.

Major Gen. Yakubu Gowon said that the scheme had in almost five decades of its existence successfully harnessed the potentials of graduate youth as models for defining patriotism, credible and quality leadership as well as economic regeneration.

According to him, the media outfits will no doubt contribute towards enhancing and sustaining the capacity of the scheme to consolidate its achievements and reach out to its global audience.

He said “in particular they will serve as veritable tools for driving our quest for national unity: cohesion and purposeful development.

“It is my earnest expectation that Nigerians will not only find the NYSC radio and television stations as reliable platforms for information dissemination, education and entertainment, but also ensure regular patronage of their services.

“In doing so, we will be demonstrating our collective determination to bequeath a better nation to future generations of Nigerians,” he said.

Gowon said that he was delighted that corps members continued to render patriotic and selfless services to the country, especially as active participants in the implementation of national programmes.

He added that he hoped that the achievements would be given the widest publicity by the  stations in order to elicit increased support from the general public.

The elder statesman appreciated governments at all levels for according priority to matters of youth development and the NYSC in particular.

He appealed to all stakeholders to give more support to the scheme in its arduous task of promoting national unity, integration and development in line with its vision.

The Director, Press and Public Relations, Mr. Eddy Megwa in his address said both the radio and television stations would tremendously boost the visibility of the scheme in the media space both locally and internationally, adding that they would also project and amplify the achievements of the scheme. He pointed out that the NYSC Radio and Television hit the airwaves barely a month after the licences and commended the Director General for the giant stride.

There were goodwill messages from the minister of youth and sports development, Mr Sunday Dare, represented by the permanent secretary of the ministry, Alhaji Isma’il Abubakar, NYSC national governing board chairman, Ambassador Fatima Balla Abubakar, represented by a member of the board, Alhaji Yusuf Nalado.

Other dignitaries that were present at the ceremony include the Chief of Army staff, Lt Gen. Farouk Yahaya, who was represented by Major General PP Mallah.